The history and lore of the Eklund Hotel, Dining Room and Saloon play a significant part in the heritage of Clayton, NM. James Lee Burke wrote about the Eklund in his book Bitterroot, "…(we) drove back to Texas through the northern tip of New Mexico and stopped for the night at Clayton, a short distance from the Texas state line. We walked…to a nineteenth-century hotel named the Eklund and had dinner in a dining room paneled with hand-carved mahogany. The hotel was three stores, built of quarried stone, anchored in the hardpan like a fortress against the wind, …On the wall of the small lobby was a framed photograph of the outlaw Black Jack Ketchum being fitted with a noose on a freshly carpentered scaffold. Another photograph showed him after the trapdoor had collapsed under his feet. Most of the patrons entering or leaving the dining room were local people and took no notice of the photographic display…(we) walked outside under a turquoise sky…I looked back over my shoulder at the stone rigidity of the hotel and its scrolled-iron colonnade…and I wondered if cattle and railroad barons had hosted champagne dinners in the hotel dining room, or if cowboys off the Goodnight-Love Trail had knocked back busthead whiskey in the saloon and shot holes in the ceiling with their six shooters…But I think it was all of the above, truly the West." 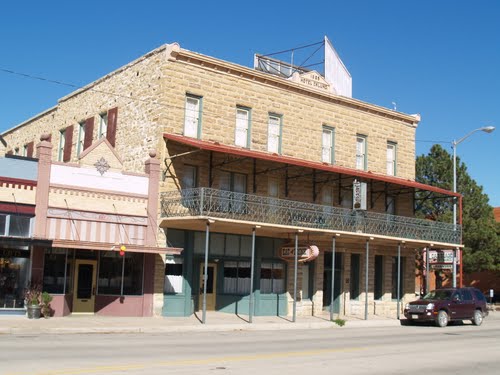 The first two floors of the west side of what is now the Eklund Hotel was build in 1892; for two years the ground floor was used as a store and the upstairs rooms were rented out. In 1894, Carl Eklund, a Swedish immigrant, came to Clayton, NM and bought the building. He opened the Saloon using the historic bar and back-bar which is still in use today. It is said that he won the bar in a poker game with ten dollars he had borrowed.
The saloon business flourished and in 1898, Mr. Eklund built the first two floors of the east side of his then prospering venture, including a kitchen and dining room. In 1905 a third story and the second-floor balcony were added. Considered the finest hotel in the area, the Eklund's rates were quite expensive, running about two dollars a night! Always progressive, Carl Eklund saw to it that his hotel was the first place in Clayton to get electricity, public telephones and a switchboard.

In 1908, the Clayton Union County Courthouse was partially destroyed by a tornado. Several County offices were moved into a portion of the Eklund's rooms and business proceeded as usual. A makeshift jail was constructed on the north side of the first floor. In more recent years, that room has been used as a private dining room.

In 1937, Mr. Eklund turned the management of the Eklund Hotel over to his daughter and son-in-law under whose management it remained for thirty-five years. The Eklund was sold in 1972 to an investor who restored the historic Dining Room and Saloon, but Hotel operations were suspended. The Eklund was sold again in 1987 and 1990. In 1992, a group of private investors, mostly local residents, purchased the Eklund and struggled to keep the Dining Room and Saloon operating. By the late 1990's, the success of those struggles enabled the owners to start planning very carefully and thoroughly the restoration of the historic Hotel space and operations. The financing was closed and construction began on June 10, 2003 and completed in March, 2004. The original forty-two rooms and community bathrooms have been made into twenty-six rooms each with a private bath. The Dining Room and Saloon have also undergone renovations.