The Santa Fe Trail was the first of America’s great pathways from the Mississippi River area to the west. It preceded the Oregon and California trails by more than two decades. It was a trail of commerce transporting Amercan goods to Santa Fe in what was then the Republic of Mexico. During its colorful history, from 1821 to 1880, the trail was used by
traders and merchants, mountain men, gold seekers, military expeditions, emigrants and a few early-day tourists. Much of the Santa Fe Trail followed older Indian trails.
In Kansas, the Santa Fe Trail divided into two branches. The Cimmaron Cutoff Branch, or Desert Route, was shorter but had a 50 mile stretch of waterless prarie and was also more susceptiple to Indian attack. The Mountain Branch, which followed the Arkansas River to Bent’s Fort, then turned southwest to climb Raton Pass, was longer and required an ardous climb over the mountains.
The Cimarron Cutoff passed through the Clayton area, and the Rabbit Ear Mountains, just north of Clayton, were famous landmarks on the Santa Fe Trail. (The mountains were named for Chief Rabbit Ears, a Cheyenne Indian, who was killed in battle on the mountain and is
supposedly buried in a secret cave there.)
In 1964, State Senator William C. Wheatley of Clayton was
instrumental in having the Clayton Complex designated as a national Historic Landmark. The Complex includes Santa Fe Trail campsites and geographical features beginning at McNees Crossing near the
Oklahoma State Line and extending for 35 miles southwest along the trail to Round Mound (Mount Clayton); which is south of U.S. Hwy. 87 between the small communities of Mt. Dora and Grenville. In 1987, President Reagan signed a law establishing the Santa Fe National
Historic Trail, which ensures identification and preservation of various trail landmarks and artifacts for public use and enjoyment. The
National Park Service is working with an advisory group and private landowners to plan, develop and maintain segments and sites along the trail.
To visit the Santa Fe Trail sites near Clayton, take Highway 56-64-412 east from town. At 1.6 miles from the main intersection (stop light) in Clayton, the deep swales of an early day trail crosses the road at an angle. These are probably the ruts of the Kenton Freight Route, which was quite active around the turn of the century. However, this freight route quite possibly followed a path made by early Santa Fe Trail pack mule trains. Although the main route of the Santa Fe Trail passed north of Rabbit Ear Mountains, early caravans passed to the south of these mounds, according to Gregg’s Commerce of the Prairies. 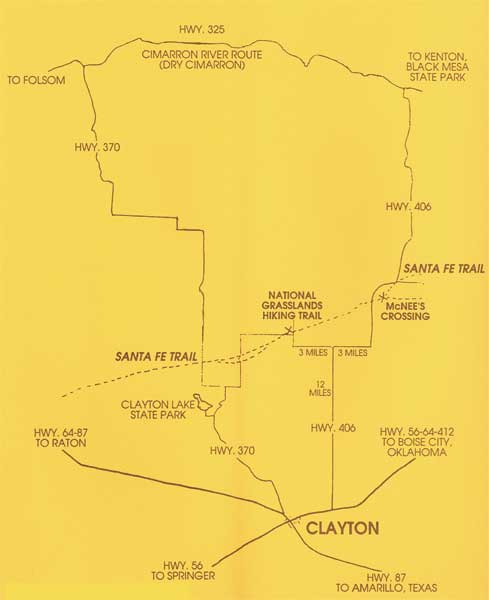 At the present time, there is no highway marker at this site, but the swale is very evident on both sides of the road. To visit the Santa Fe Trail sites north of Clayton, continue approximately 1.4 miles farther on Hwy. 56-64-412 (past the rest area), then turn north (left) on State Highway 406 and follow this road to the 18-mile marker. You will see the Old Moses Church off to the left. This church was originally built in the late 1800’s about 2 miles up the hill west of its present location, then was moved stone by stone and rebuilt on its present site in 1914. Looking toward the western horizon, beyond the church, traces of the Santa Fe Trail can be seen disappearing into the distance.

Approximately 2/10 of a mile farther along Hwy. 406 the road crosses the Santa Fe Trail. There is a state highway marker here, just a few feet south of the swale. Looking into the pasture to your right, you will see a windmill and a white monument in the distance. About 100 feet further north there is a gate into the pasture and the landowner will not object to you entering the pasture as long as you CLOSE THE GATE BEHIND YOU! The road to the monument and McNees Crossing,
approximately 1 mile, is two rough ruts through the pasture and should not be attempted in bad weather with a vehicle in tow.
The monument, placed by the American Legion in the 1920’s,
commemorates the morning of July 4, 1831, when members of a 100-wagon caravan held the first Independence Day celebration in the
territory of what is now the State of New Mexico.
Slightly to the southeast of the monument is a dirt ramp leading down to the North Canadian River (called Louse Creek or Louise Creek in trail days and now known as Corrumpa Creek). This is the original Santa Fe Trail Ramp at McNees Crossing, now somewhat eroded. You can clearly see the rock bottom where the wagons crossed the creek (which is usually dry), and traces of caravan campgrounds have been found on both banks. Two trail branches converge here, having split about eight miles east in the vicinity of Camp Nichols, Oklahoma.
In the Autumn of 1828, two young traders named McNees and Daniel Munro rode ahead of their east bound caravan and stopped to take a nap at this crossing. While they were asleep, Indians came up and shot them, possibly with their own rifles. When the caravan arrived, McNees was dead and was buried on the spot. The wounded Munro was carried on to the Cimmaron River, where he died.
Returning to Hwy 406, you may continue north, crossing the creek on a modern bridge. The road turns to the east for about 1-1/2 miles, then turns north again. At this intersection, a road comes from the east. To the north of this road, you can see a deep swale coming down the hill. This is a perfect example of Santa Fe Trail ruts, a large
indentation in the ground 10 to 12 feet wide and sometimes 4 or 5 feet deep.
Retrace your route south on Hwy 406 to approximately the 12-mile marker where Hwy 406 turns left (south), take the dirt road straight ahead (west) 3 miles, then right (north) 1 mile. Straight ahead and to your left in the pasture, which is part of the Kiowa National
Grasslands, you will see the ruts or swale of the Santa Fe Trail marked with stone pillars. This section has been set aside as a hiking trail, and you are welcome to walk it.