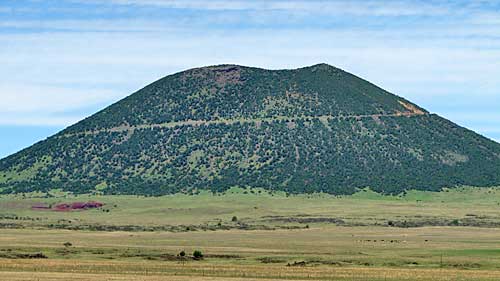 Capulin Volcano is at more than 7000 feet in elevation. Summers are cooler than typical of the Southwest and winters are cold and snowy. In summer, highs may reach 85 with lows in the 50s. Winter may have warm days in the 60s, but single digit temperatures and snow are common.

Between 58,000 to 62,000 years ago, just yesterday on the clock of geologic time, the scene near Capulin would have been one of fire, ash, glowing lava, and ear-shattering explosions.

Capulin Volcano formed during the most recent period of activity in the Raton-Clayton Volcanic Field. The cone rises more than 1,000 feet above the plains to 8,182 feet above sea level and consists chiefly of loose cinders, ash, and other rock debris. These materials were ejected during successive eruptions and fell back upon the vent, piling up to form the conical mountain. The symmetry of Capulin Volcano was preserved because lava did not flow from the main crater but from secondary vents located at the western base of the cone.

Evidence of the other episodes of activity can be seen in nearly 100 nearby volcanic peaks and lava capped mesas. The largest of these volcanic peaks is the Sierra Grande, an extinct volcano rising some 2,200 feet above the surrounding plain, about 10 miles to the southeast. The largest lava flow is Johnson Mesa, 14 miles long and 7 miles wide, to the west of Capulin. 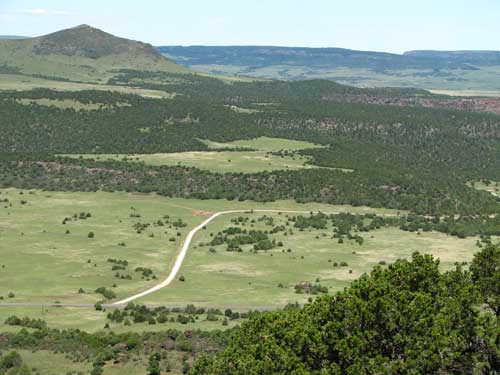